A unique land with volcanic subsoil, Iceland can be explored inside two electric Volkswagens. The story of a road trip in ID.4 and ID.5, between asphalt and gravel road.

Stuck in the middle of the Atlantic Ocean, between Greenland, Norway and the Faroe Islands, Iceland is a small piece of land of 102,775 km². Due to its location, on two tectonic plates, it is known for its significant volcanic and geothermal activity. Conservation of nature and energy is important to the population of the area: only 380,000 inhabitants, mainly gathered around the capital city of Reykjavik.

The island has no railways, and the locals therefore rely on 12,900 kilometers of paved roads or “gravel roads”, black gravel tracks that almost make us think of the lunar landscape. Since the road is still the main mode of transportation, can the electric car be suitable for use in this “iceland”? We did a test with two Volkswagens, the ID.4 Pro 4Motion and the ID.5 GTX.

In red and black

After arriving at Keflavik airport, in the extreme southwest, we take the road to the center of the island in the ID.5 GTX. My partner for the day, Éric, is a Swedish journalist. Like me, he finds his bearings quickly on board the electric Volkswagen, as all their rooms are very close. This GTX version however stands out with its sportier skins (touches of red and black) and its higher power.

Thanks to two motors (one on each axle), this has increased to 220 kW, equivalent to 299 hp. All this power is however released at the peak for 30 seconds and under conditions. The temperature of the 77 kWh battery must be between 23°C and 50°C, and the battery charge must be greater than 88%. So this reduces the thrust effect that one might expect to see in a sporty SUV model, especially since it is heavy and more than 2.2 tons. However, the Icelandic speed limit of 90 km/h and the changing terrain force us to temper our enthusiasm.

At the end of this first step, we discover the Geysir site. This large geothermal area is filled with hot springs that exceed 80 to 100 degrees. It has also given its name to gears that have entered the common language. Volcanic activity is intense there, and onlookers flock, cameras and smartphones in hand, to capture the moment when hot water erupts from the ocher ground, several meters up.

We take the road again towards the South of the island, for further exploration of the Icelandic landscape. At first, we take the paved highways, including the National 30 that connects the main axis of the island, Route 1. But before that, we plan some off-road trips to test the off-road capabilities. We also take the opportunity to change mounts, and we have the right to get the ID.4 Pro 4Motion in black. This previous model, currently not sold in France, has the latest version of the ID.Software 3.1 infotainment system. It offers a few more displays on the meter screen, including average usage, as well as a better router and improved, but sometimes very intrusive, voice recognition. Occasionally, the system is triggered during a discussion between passengers, without knowing which word is in the original.

During our break, we also take the farm key, towards the Hjálparfoss waterfall. At this point, two rivers meet, just a few kilometers from the Hekla volcano. The sublime scenery recalls the world of The Hobbit, with its green plains punctuated by black volcanic rocks and small streams. On rocky tracks, our ID.4 Pro 4Motion handles like a boss. The movement takes place in silence, which does not frighten the sheep and horses on the edge of the tracks. This version has the same dual-motor system as the GTX, but the combined power here is reduced to 195 kW (265 hp). The 150 kW rear main motor is always used, while the 80 kW asynchronous front motor comes on only when needed: when it loses grip on a wet surface, or when going on asphalt roads. Efficient 4×4 system.

After lunch at Hotel Ranga, a large farm on the banks of the Ytri-Ranga river where salmon is caught, we take the road to the island’s capital, Reykjavik. We haven’t charged the cars, so we leave with about 50% battery, which should be enough to reach the meeting point. At first, my companion for the day passed a normal pace, without ecological driving. But the roads are twisting and climbing more and more. We see freedom melting by climbing the hills. At 48 kilometers from our point of arrival, we have about 57 kilometers of freedom left, and therefore very little. 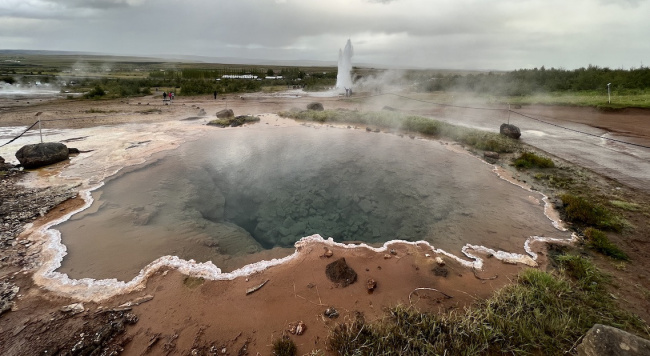 The weather is getting rough, and the GPS shows that we will have to stop again before the end of our journey. We decide to take a break, then adjust our strategy. I take the wheel and try to regain energy by “coasting” (freewheeling) and maintain my speed around 70 to 80 km / h. Luckily the traffic is light and I don’t bother anyone. I also use the regenerative braking (mode B) to the max. My approach is paying off, as I gain more power on the descent, and see my freedom slowly increase. My partner smiles again.

At the end of the route, after a few cold sweats, I finally arrived in front of a charging station in Reykjavik with a 16% battery and a declared range of 92 km. The average consumption since the start of the day is equal to 20.9 kWh/100 km according to on-board computer, and 284 kilometers are covered. Based on this average, the ID.4 Pro 4Motion can then theoretically travel 370 kilometers on a single charge. Enough to allow for a few family trips, or a second trip to the eastern part of the island. When do we leave?

Which electric car to choose from Volkswagen? Our guide

price, options, freedom, all about the electric return of the legendary car

Volkswagen ID.7: the future electric car under an electronic disguise

Xiaomi handed the appearance of the 12S series entirely to BYD

why this confuses us

everything will change in 2023 with the electric Golf

everything will change in 2023 with the electric Golf

why diesel is still relevant in 2023